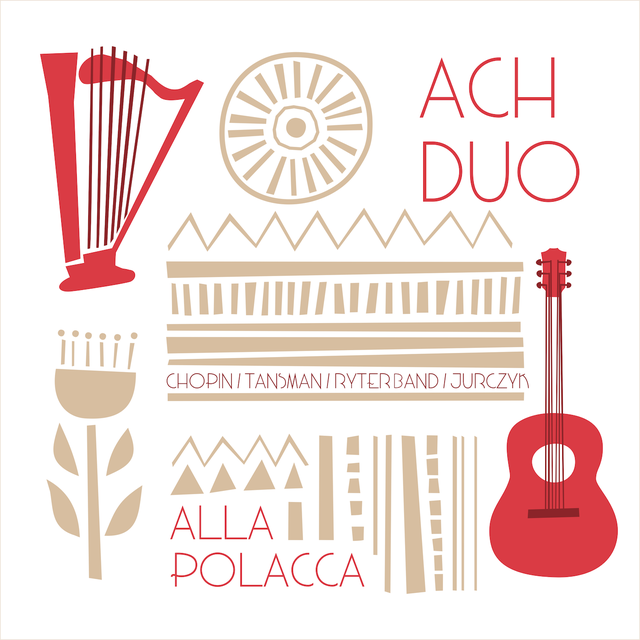 The first Polish CD with music for guitar and harp duo

Alla Polacca - is the title of the first Polish album containing Polish music for the guitar-harp instrumental duo, which is released at the turn of 2020 and 2021 by The Association for Polish Guitar Music Development under the small great music (QBK) record company. The pieces on the album were recorded by the unique ACh Duo, formed by guitarist Aleksander Pankowski vel Jankowski, a graduate of the Karol Szymanowski Academy of Music in Katowice and harpist Noemi Hańczyk, a graduate student at The Karol Lipiński Academy of Music in Wrocław.

The name of the disc is inspired by the title of one of the parts of the work ‘’Suite in modo polonico” by Alexandre Tansman, which was included on the album, in a special, original arrangement for guitar and harp, made by the composer himself. The recording of Suite is the very first full recording of this piece in the world and it was never fully recorded after its creation.

The album also contains original transcriptions of Fryderyk Chopin's works arranged by Anna Wołowczyk - Prelude in D flat major, Op. 28 No. 15 and by the performers themselves - Waltz in C sharp minor, Op. 64 No. 2. The entire publication is complemented by compositions played solo by the artists - Grzegorz Jurczyk's ‘’Fogbound Mountains” for guitar and ‘’Deux images’’ for harp, composed by Roman Ryterband.

The album is co-financed by The Minister of Culture and National Heritage from The Culture Promotion Fund as part of The ‘’Musical trace’’ program implemented by The Institute of Music and Dance.