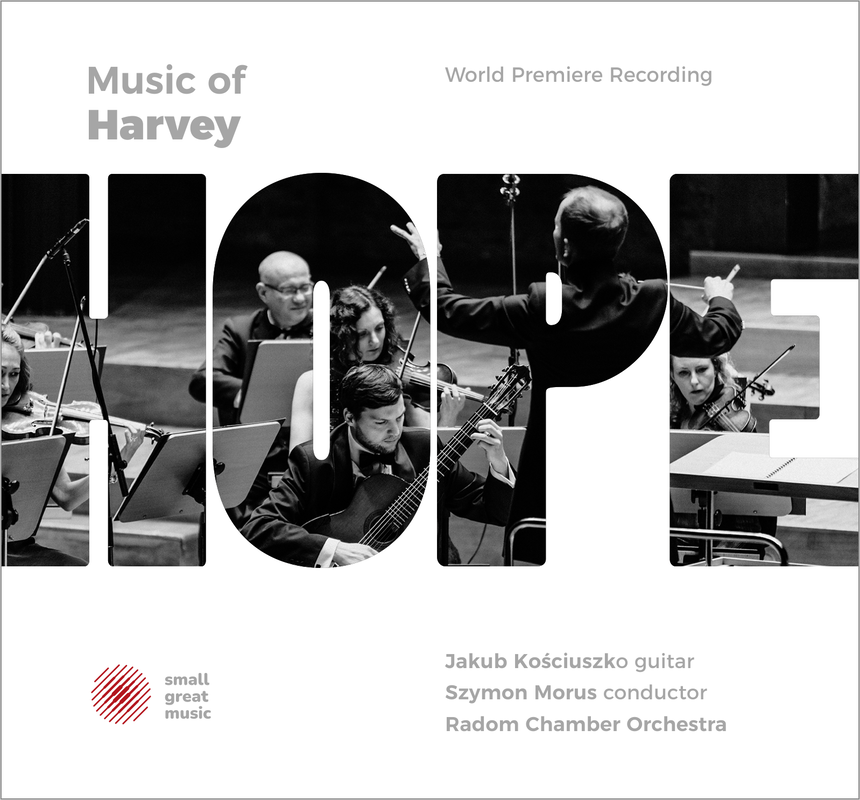 ​We release into your hands the record with the phonograph world premiere and the culmination of the World Premiere Tour in the hope that it will captivate and enchant you, just as all other listeners, with its emotional saturation, romanticism, and openness. It is a tribute paid to the composer and an attempt to preserve his legacy, keep his passion alive, and fulfil his dreams. It is also a great joy – of creation and listening.
We would like to extend our thanks to all the wonderful people who contributed to the creation of this record.

What is the secret of the uniqueness of Harvey Hope’s masterpieces? It lies in his passion and devotion to art, his rich personality, his sensitivity to the surrounding world, his love for people, and, last but not least, the way in which he integrates personal experiences and images into his inner world permeated with abstraction and illusion, forming marvellous musical landscapes, which are remarkably diversified and yet cohesive.
And yet, there remains something else … the extraordinary atmosphere and the mood of Hope’s musical pieces with no boundaries between music and audience, emotional saturation and depth, and openness and candour of a musical utterance.
One may get an impression of Harvey being nearby …

The performers take us on a musical journey to the destinations Hope relied on as the source of inspiration for his masterpieces where he discovered the beauty of natural landscapes and local traditions. Both in the solo and the orchestra parts, the composer is gradually progressing from simple folk motives to increasingly sophisticated and oftentimes abstract melodic and harmonic solutions. This is a testimony of Hope’s infinite imagination, which amazes with the abundance of ideas and the degree of diversification of individual pieces. This truly artistic feast is only a prelude to an insight into Hope’s impressive oeuvres and an experience that won’t let anyone remain indifferent to the musical message embodying the beauty of feelings and emotions shared by the composer.

It tells a mysterious story made up of a series of images which inspired the creation of a musical tale.
A path to the forgotten bridge. The forgotten bridge. A girl on a bridge. A bridge – these titles intrigue and inspire curiosity about the musical vision of the composer, who had a hard time choosing the most fitting one.
Remarkably, in spite of the expectations for the solo performance, the guitar part is not overly emphasized, but rather remains equal with the part of the orchestra.
In the pastel cantilena style first part, Harvey Hope lets us wander into the depths of his exceptionally beautiful and sensitive personality with an extraordinary creative potential. The unparalleled imagination of the composer brings about a musical landscape brimming with astounding and mood setting sound effects. Taking a glance at the musical score one can’t help but notice the precision with which the individual bars are described. The guidelines offer a clear insight into the piece as a proof of composer’s expectation of precisely specified agogic modifications in an effort for the action to unravel within defined time limits. The conveyed impression is that the creative inspiration was not merely a vague vision or an elusive thought.
Filled with restlessness and anxiety, the dynamic part two tells a tale of a forlorn structure that seems to be hiding ancient secrets and extraordinarily tumultuous and satiated images of the past. There is also a glimpse of a moment of spiritual helplessness and appeasement of the musical action, which inspires inquiries about the reasons for fighting, the meaning of the past, and maybe even of the future. The solo guitar cadence seems to be the musical response and the expression of acceptance and understanding of the purpose of struggles in life.

„near the lake, where clouds
​weave shades of gossamer”

Harvey Hope offers a deeply personal and a remarkably poetic description of his own masterpiece:

This symphonic poem was inspired by a walk in the Parcul Herăstrău, Bucharest. Composed in romantic style, it is a series of episodes where upon following the twists of secluded paths, a new vista surprises and delights the eye at every turn and one is almost overwhelmed by the beauty of the shimmering expanse of water, fringed by trees, where „clouds weave gossamer shades”.
But this music is not just a tone poem of the Parcul Herăstrău with its extensive tranquil views and birdlife. It is also an impression of the sentiments that reside in the Romanian heart. A temperament which can only be described by the almost untranslatable word „dor”; a yearning and longing, sorrow and torment, desire and nostalgia, homesickness and wanderlust yet embracing at the same time an appreciation of beauty both natural and artistic, an affection for myth and legend, a sincere piety, a joy of living, and an incomparable generosity of spirit.

Four New Folk Songs are a cycle of pieces with undeniably diversified styles:
I. Chant Rondeau
II. Ballad
III. Shanty – Sea Song
IV. Round Dance – Finale
Harvey Hope, as an exceptional expert on the possibilities of the classical guitar, spruced up traditional musical themes and presented them in an entirely new light.
Innovative harmonic solutions, agogic alterations, and a bold application of counterpoint and melodics of voices testify to the artistic mastery and the limitless imagination of the composer. The musical plots of every part seem to be dissociated from their original “utilitarian” purpose. In the approach adopted by the composer, they acquire a different meaning, as the conveyed message is no longer so simple and literal. When joined in a stunning harmony they sound truly metaphysical.

Adagio, a peaceful and a contrasting middle part of the series of Three Symphonic Poems op. 52, was inspired by Romanian landscapes and by walks along the shores of the Zemborzycki Lake.
The ruminative character and the candour of the message, as well as the rich and profound harmony, result in the piece unfolding as an independent entity among the remaining compositions. As a matter of fact, it constitutes a bridge connecting other masterpieces which are extremely divergent in their expression, as if becoming a breath and a moment of emotional appeasement.
The composer intended his masterpiece for a symphony orchestra.
The masterpiece has also two versions for a chamber orchestra: op. 52 for violin, cello, and piano, and op. 52b for flute, clarinet, and piano.
The premiere of the first version for a string trio was enthusiastically received by the audience in Lublin during the 10th Jubilee Andrzej Nikodemowicz – Time & Sound International Festival at the Crown Tribunal in Lublin on 2nd October 2021.

De Madrugada is a piece composed with a slight twist, something of a musical pun in a truly Spanish style, intended as a humorous alternative to the much overplayed Concierto de Aranjuez referred to by the British as … Orange Juice.
The masterpiece is maintained in the form of a three-part Concertina for guitar and a small orchestra, which sets the stage for a taste of contrasts and changing moods. Starting with the very first tones, it electrifies and mesmerizes with clarity, sweeps the audience off their feet and carries them away to picturesque Spain. It is a typical virtuosic masterpiece, offering the solo instrument an opportunity to show off its full sound palette and possibilities. With all its lightness, the part of the guitar is especially glamorous. The pulsating rhythm and flamenco scales along with the refined lyricism and sweetness are dominated by the Spanish rite.
The uniqueness of the masterpiece is complemented by the Spanish titles of individual parts.
With its continuous dance rhythm, the first part, Danza de los Sueños (Dance of Dreams), resembles an invigorating warm-up before a dawn of a new day. The luminescent dialogues of the guitar and the first violin evoke an atmosphere of joy and happiness. They inspire a smile and are radiant and filled with promises and optimism. Amanacer (Dawn) is the delicate and melodious second part with intertwined guitar cadences and violin solo parts. It is time to wake up and prepare for a good day ahead and for a walk to the bustling, exciting, and joyful Mercado de la Mañana (morning market). It is impossible to remain indifferent to the agility and the liveliness of the final part, De Madrugada, as smiles are irresistibly brought to faces and restless feet escape control and begin to tap to the fiery rhythms of a bravado coda.

Harvey Hope (27.05.1943 – 27.12.2014) – an English musician, a guitarist, a composer, a “Classical Guitar” historic consultant, an educator, an author, a collector, and a member of The Royal Society of Musicians. He was the lead authority on the Baroque guitar. His international career included such accomplishments as recitals, records, radio and TV recordings of the early guitar music performed on original 17th century instruments.

Released in 1978, ‘Baroque Guitar” was the first solo album devoted in its entirety to the Baroque guitar music performed on original instruments. Hope pursued his intensive performing career along with studies of the guitar history.

Hope’s collection of 17th and 18th century guitars was considered one of the finest privately owned.

Performing concerts all over the world, he formed a special fondness for Central and Eastern European countries and especially for Poland, Czech Republic, and Slovakia. He visited them for the very first time in the early 90s and he would make frequent returns for over twenty years performing recitals in Prague, Kutna Hora, Mikulov, Warsaw, Cracow, Wrocław, Szczecin, and Lublin. During his concerts he would present exquisite music and exceptional instruments, as well as establish long lasting friendships.

Held in high esteem first and foremost as a distinguished instrumentalist, Hope was also a talented composer. His achievements include classical music solos, chamber, orchestral, and ballet music, children’s miniatures, as well as film and popular music. Hope’s musical pieces are emotional, romantic, charming, frivolous at times, personal, remarkably “picturesque”, and often inspired by the beauty of the natural landscape.
As for titbit, Hope did not receive any formal musical education and was an autodidact, which did not prevent him from achieving spectacular professional successes.
​